I-81 project: 700 property owners, renters get a vote on new noise barriers in Syracuse

Syracuse, N.Y. – About 700 property owners and renters can vote on whether they’d like the state to build noise barriers blocking highway traffic as part of the proposed Interstate 81 project.

The noise barriers wouldn’t line the entire highway system. Rather, they’re proposed in areas where the traffic noise is expected to reach a certain level in places where a highway is within 500 feet of homes.

The property owners and renters who get a vote live in a place where the noise is expected to be at least 67 decibels (similar to a vacuum cleaner), and the barrier would reduce the noise by at least 5 decibels.

The Department of Transportation sent out letters to about 680 people within recent weeks, letting them know they have a vote, according to the DOT’s I-81 project director Mark Frechette.

It’s important to vote: The state must receive ballots from at least half of those 680 to justify the barriers. And at least half of the votes must be in favor of the wall for the state to proceed. The deadline for voting is Sept. 5.

Many responses already have come in, Frechette said Wednesday at an information session about highway noise at Dr. King Elementary School. Three more sessions are planned, and anyone can come whether they got a noise letter or not. The sessions are from 4 to 7 p.m. at:

The state has proposed a $2 billion plan to tear down a portion of I-81near downtown Syracuse and reroute highway traffic onto Interstate 481. The $2 billion project would also rebuild about 1.5 miles of I-690.

No existing noise barriers would be lost along Interstates 81, 690 or 481 as part of the $2 billion highway project, Frechette said.

Currently, the proposal would put an additional 14 noise barriers up along the highways under the state’s preferred highway plan, which is called the “community grid.” The barriers would be made of concrete. They’d range from 12 to 20 feet high.

The state’s proposed $2 billion plan to rework Syracuse’s highway system is in a draft stage. DOT officials are taking ideas and criticisms about the current proposal.

Read more of our I-81 coverage:

Why the tunnel lost and the grid prevailed

See the I-81 grid plan maps in detail 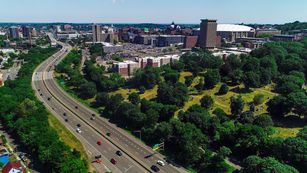 Let I-81 Project Director Mark Frechette show you exactly what's wrong with Syracuse's highway system -- and how the state proposes to fix it.