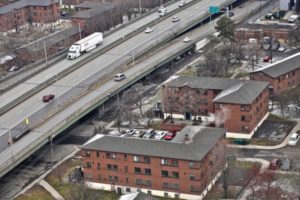 SHA Executive Director, Bill Simmons, issued a letter to tenants seeking to survey their needs and
gather their ideas about safeguarding resident safety and quality of life during the I-81 demolition and
reconstruction.

Earlier this Spring, the DOT released a 15,000 page long Draft Environmental Impact
Study (DEIS) & Environmental Justice (EJ) analysis which contained some details about construction vibration
or noise levels which can be expected during the I-81 project. But it takes an astute reader to find and
understand those details. In fact, the document indicates that many of the construction details will
come later, after the state hammers out contracts with builders.

“That waiting can foster rumors and worry,” said Bill Simmons. “Our letter seeks to identify the most
pressing questions and concerns about health, safety and quality of life for the people who will have to
endure the greatest disruptions during the process.”

SHA residents are part of an environmental justice population and therefore NYSDOT must demonstrate
that no disproportionality high and adverse effects would be predominately borne by SHA residents.

Residents and advocates have already made a number of suggestions, some of which include:
• Central air conditioning and sound-proof windows so Toomey Abbott Towers residents
can avoid opening windows during construction.
• A new road to guarantee constant access to Toomey Abbott and a portion of Pioneer Homes.
• The ability to move to another subsidized home if the construction gets to be too much for
individuals with certain health conditions.
• Respiratory testing of residents both before and after construction to monitor for health problems
that might be associated living next to the area’s biggest construction project in generations.

The full letter can be read on the SHA Facebook page:  www.facebook.com/syracusehousing/

“Most residents still like the idea of the community grid,” said Simmons. “Their wish list isn’t an
overall criticism of the proposal.”

State transportation officials have said they are listening.